August 2013
SAILOR EARNS AKC COMPANION DOG CD OBEDIENCE TITLE!
Sailor Qualified for his THIRD 'CD' Obedience Title Leg & nice 2nd place (in a large class of Eight) to earn his **AKC Companion Dog 'CD" Obedience TITLE** on August 17, 2013!
Sailor qualified for all of his 3 Obedience Legs back-to-back quickly, with high scores and a 2nd Place Placement (class of eight) & 3rd Place Placement (class of ten) in his large classes,
and he earned his First & Second CD Legs back-to-back in one weekend on the first try! He received many lovely compliments from his Obedience Judges.

June 2013
SAILOR QUALIFIED FOR HIS *FIRST*
& *SECOND* CD OBEDIENCE LEGS **
back-to-back in one weekend on the first try, with nice scores & a 3rd Place in his large class!

August 2012
**Sailor Earns Obedience Title!**
Sailor Qualified for his 3rd Leg in Beg. Novice Obedience with a nice 193/200 score (his own performance was scored at a near perfect 198/200!)
& another *First Place* placement for his Title! Sailor earned all 3 BN Legs with high scores in mid-upper
190's/200 with Two, First Place Placements & a 3rd Place Tie in his large classes,
receiving many lovely compliments from all his Obedience Judges on his handsome
conformation and nice performance.

March 2012
Handsome Sailor happy to be showing in the show ring, as always! CONGRATULATIONS SAILOR!
Sailor has earned the Puget Sound Labrador Retriever Association ** ALL AROUND AWARD ** for his versatile Titles in Conformation, Hunt and Obedience!

Sailor winning his large Open Yellow class of Eight, the same weekend  Labrador Entry was 85 Labs
He was so happy to be showing  as you can see by his big smile and wagging tail! 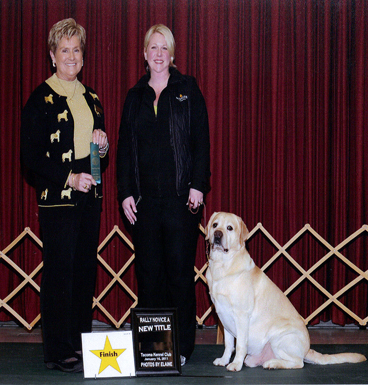 Sailor congratulates his son Perry on winningSELECT DOG in the BOB ring over 13 Top ranked Specials at GGLRC Specialty show!
Perry also won the Hunting Dog class & earned a CD Leg  huge congrats to Perry & his owners for all his wonderful achievements! October 2010

Sailor wins WINNERS DOG & BEST OF WINNERS for 2 points on May 23rd, 2010!
Sailor has now won twice under AKC Judge Mr. Hank Williams - winning Best of Breed under him in 2008!

Sailor congratulates his handsome son "Hogie" on winning Winners Dog & Best of Winners for a *3 point MAJOR*
under respected Breeder Judge Barbara Nowak of Broyhill Labradors in California on November 21st!
Hogie now has 5 AKC points & 1 Major (2 Major RWD's & a Best Puppy) from only 3 shows, at only 11 months of age...WOW!
Barbara said "Hogie has all the right parts and Lisa is going to have lots of fun with him!"...Hogie is doing his Sire Sailor proud!

Sailor congratulates another son of his doing well in the field - at only 10 months of age, his son has qualified in 3 AKC
Hunt Tests and is only 1 JH pass away from earning his Junior Hunter Title in California! Sailor is one very proud Papa!

HUGE CONGRATULATIONS to Sailor's son, Hogie! Sailor congratulates his son, TUSCANY'S SITE TO SEA, "Hogie"
at his first show debut in nice California competition, at 7 months old, Hogie won Winners Dog & Best Opposite
for his first Ch. points, and a Major RWD, winning the 6-9 month puppy class both days under respected Breeder
Judge Nancy Talbott! Nancy Talbott said "Hogie is a very lovely puppy". Hogie is following in his Sire's footsteps,
as Sailor won at his first (specialty) show too! Hogie is loved by all of us and breeder/owner handled by Lisa Colombani
of Tuscany Labradors in California. Way to Go Hogie - we are thrilled! See more photos of Hogie on our Litters Page...


Hogie loves his new football that we sent him to celebrate his big win and successful first show! 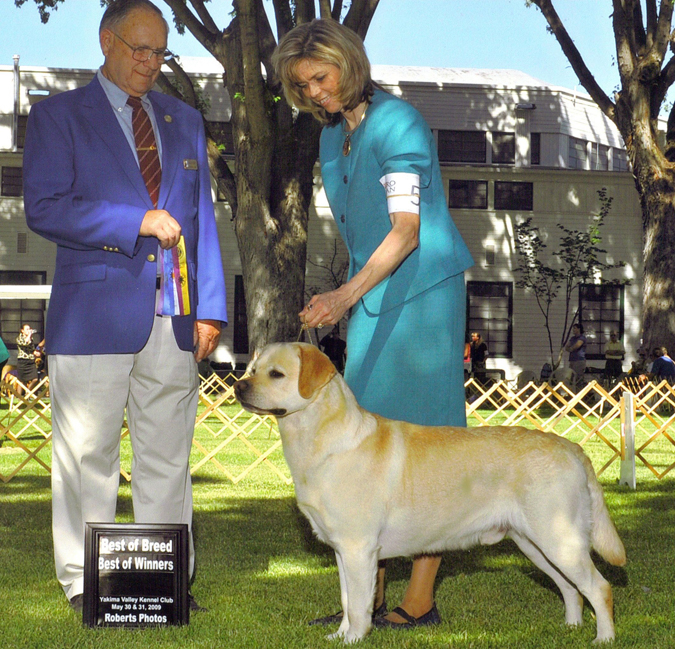 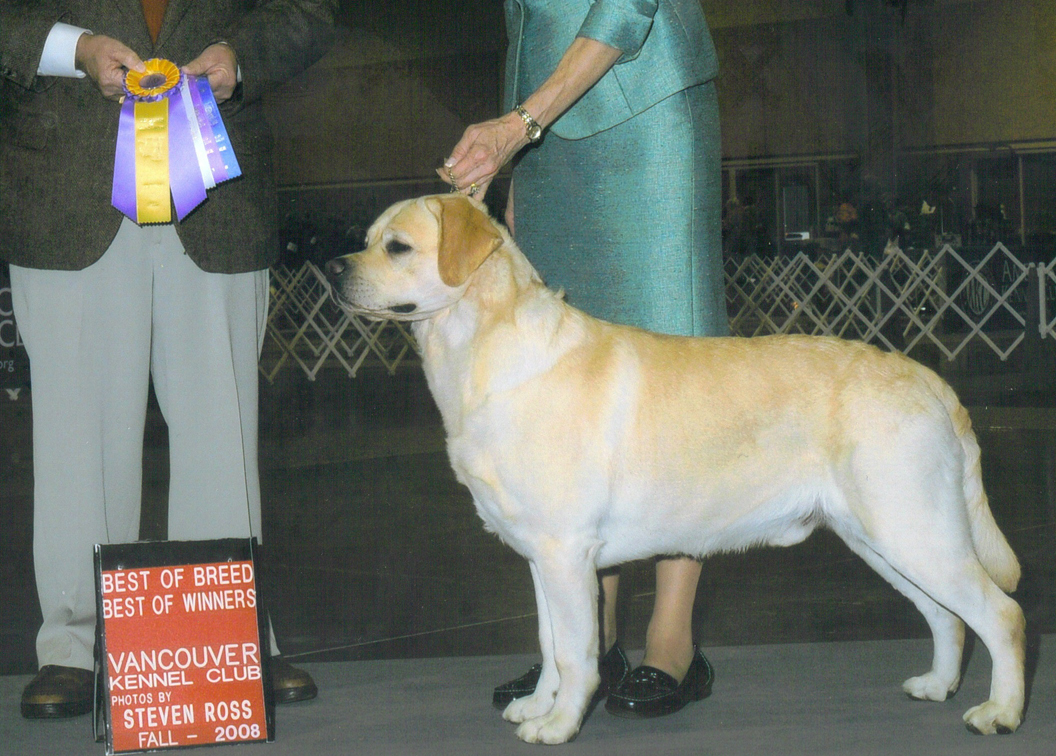 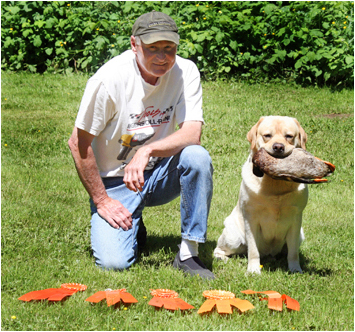 We are very proud and happy to announce that Sailor earned his fourth JH Qualification for his
****Junior Hunter Title **** on Saturday, June 14th
at the AKC Umpqua Valley Retriever Club Hunt Test in Glide, Oregon.

Sailor earned his *Five* Junior Hunter Qualifications in consecutive, back to back Hunt Tests!
All five of his qualifications were earned at AKC Hunt Tests in Oregon,
in new locations and unfamiliar territory and fields.
Sailor has proven himself a very talented hunter and retriever in the field! 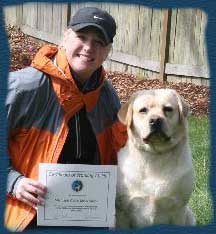 Sailor will be earning his Junior Hunter Title & WC this Spring 2008...
He is a very talented retriever with amazing bird drive...he loves his birds!
We are very proud of his natural ability...it is a thrill watching Sailor perform in the field.
Sailor is truly a Versatile Labrador... 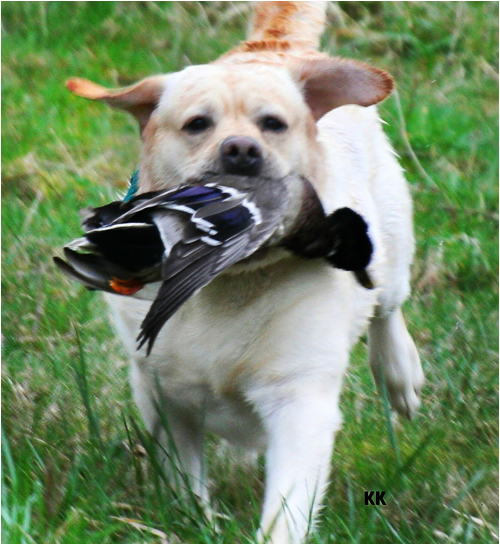 Sailor with the king of all ducks...a Mallard Drake